"The Trek ramblings of a geeky Drag Queen"

Before I get into the details of this particular cosplay, let me apologise for the recent neglect of my Star Trek Blog. A combination of other assignments, work and even a little laziness all intervened. If ever there was a time for me to be Trek blogging, it has been the past 12 months; with Star Trek celebrating its 50th anniversary, my trip to the Vegas convention and the new details of Star Trek Discovery coming in thick and fast. My thoughts on the aforementioned will be blogged in the very near future.

For this year's Destination Star Trek Europe (not as glamorous as it sounds, it's being held in Birmingham, UK), I settled on my new cosplay, that being Martia the shape shifting villain from ST:6. Deciding on who to dress as is a tricky business, it can make you indecisive, especially with a huge universe of colourful characters to choose from. My choices have always been fairly limited however as I have to lean towards characters with a suitable flamboyance to amalgamate with a Drag Queen. Most of my favourite Star Trek gals pretty much live in their all encompassing Starfleet uniforms which stretch from their neck to their toes, a look that covers my albeit fake curves. With the exception of the ultra fitted costume of 7 of 9, the uniform jumpsuits can give a frumpy look, not to mention that in a uniform, you're in danger of blending in to the crowd at any given Trek event.
Despite Martia being covered in fur from head to toe, I was drawn to her because of her exotic look, elaborate feather hairstyling and dramatic make up application.


What became apparent very quickly is that images of Martia are either scarce or lack detail. Many of the images of her on Google are low resolution, grainy screen shots from the movie or do not show her costume in its entirety.  Add to that, there is not a single shot in the movie where you see a full length uninterrupted clip of the character. The most useful image I found was in the book 'Star Trek Costumes' by Paula M. Block and Terry J. Erdmann, a must-have publication for any Star Trek cosplayer! I drew a series of sketches where I guessed at certain elements such as coat length, sleeve openings (was it in fact a coat or a shawl?) and her shoulder pieces (was that in fact a separate cape or part of the coat?). With character cosplay, the goal is to get your outfit looking as close to the screen seen costume as possible, so I'm happy to take artistic licence as long as it resembles what I see on TV. Fortunately, Martias costume was made to look 'rustic' as though as it was hastily mashed together in the freezing wilderness, made for survival rather than for fashion. I began collecting fur samples from anywhere I could find them, as long as they didn't have an Earth animal pattern on them, I snapped them up. I was advised by my costume maker to keep the fur of the body suit thin so that I didn't over heat, but as usual, I ultimately went for the closed fur I could find to the onscreen patterning and colour, rather than a thinner alternative (my costume maker helped keep it cooler to wear by not lining it).


After watching clips from the movie to see how the costume moved, he decided that she was indeed wearing a full coat with wizard sized sleeves (which is what was giving it a cloak look) and that the shoulder fur was actually an unused hood (understandably unused as it would have interfered with her elaborate head piece). I found a heavy brown knit fabric which was perfect for her scarf and used the same material, turned inside out to give a slightly different colour and texture as a belt to tie the whole outfit together.

One element which is always difficult to solve with futuristic costuming is footwear. Present-day earth shoes aren't often suitable and my costume maker had previously done a wonderful job replicating 7 of 9's footwear, where he covered a pair of heels with the jumpsuit material. We discussed using a similar approach with Martia's snow boots but eventually decided that a high boot would just look like cheap 'boot covers' which are a 'fancy dress shop' trick to keep a costumes cost down. After scouring the internet, I actually found real goat hair boots in Hungary which, although not quite as high as the onscreen pair, they looked like they fit right in with the snow planets Eskimo look. They are the only part of the costume which are shop bought and not hand made.


I always knew that Martia's headwear would be the trickiest aspect of the costume  It is very stylised and the front feather skull cap fits and frames her face perfectly. To achieve this smooth fitted look, I took a polystyrene wig block which was roughly the same size as my head and made a Papier mâché 'hat'.


To be sure that the piece would mould to my head without gaps or lifting up, I did the Papier-mâché in two stages. On top of the first dried layer, I glued a network of thin garden wire and sandwiched that with a second layer of paper and PVA/water solution. This would later allow me to bend the head piece to the exact shape of my head and face.


I found feather pads (on eBay, but they're available in well stocked haberdashery stores) that are usually used as hat fascinators. I bought two Grouse feather pads and three Pheasant feather pads and then used my glue gun to thoroughly stick them to my skull cap. I then lined the skull cap with tights material both for comfort and to soak up any moisture from perspiration (I left an extra strip of lining material poking out from the back of the skull cap which I used to sew to the inside of the wig).


Feather trimming (in red and ginger colours) was plucked and individual feathers were pinned into a dark brown wig.


The final touches to this cosplay was a pair of prescription contact lenses in Angel Yellow and a light-up fake cigar (available from most good joke shops). 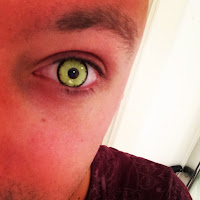 I hope this blog has helped, inspired or interested you. Enjoy your next Star Trek event and say hi if you see me over heating in a corner somewhere! Keep Trekking.

(PS: join me for more Trek talk on Twitter @themistyshow and Instagram @themistychanceshow)
Posted by Unknown at 17:20